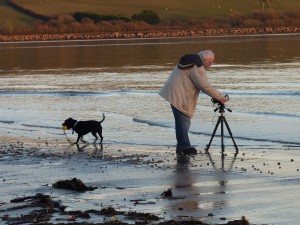 Charles Lester has been taking photographs for over sixty years. The journey began when he became inspired by spending time with his father who at the time, worked in the photography department of Alcan, the big aluminium company. The company was big enough to have a whole team of photographers recording the daily news stories and fresh innovations that led to new uses of the alloy.

His first photograph was taken using a 1920’s glass plate camera. This was a camera traditionally preferred for scientific projects as the glass plates used instead of negatives created no distortion to the images it captured. Charles’s first picture was of a simple moment in history, a poignant image of his brother as a young boy wearing shorts whilst he stood alongside their mother.

The glass plate camera was replaced by an Ensign with which Charles won 1st class at the annual Arts and Crafts Fair in 1955 for his picture of swans. At 14 he started processing and developing his own photographs giving him opportunity to begin experimenting with techniques and ways to get different effects. A trip to Switzerland at 16 meant that he had the rare privilege of his father lending him his Zeiss Icon Twin lens camera which he later took to Finland at 17. Charles’s father also had a Leica something that any professional photographer would appreciate for its own beauty and design elegance.

Later he used a 5 x 4 Speed Graphics Camera which allowed him to play with doing close ups of flowers and creatures. Eventually Charles had his own Leica which he used for pursuing his interests in capturing landscapes, flowers and people. Roses being a favourite. Whilst he never developed colour pictures, he became proficient at getting the exact effects he wanted using black and white.

Experimenting with techniques and effects has always been a favourite past-time. Playing with base relief and high contrast images as well as the cameraless photography creating photograms. Photograms is a process of capturing shadows on photographic paper. This was a technique that would be used later to create print designs for textiles.

1982 inspired a new development when a fashion photographer charged Charles and Patricia’s business a princely sum of £10,000 for a single fashion photo-shoot. Even more shocking was this shoot only produced six sets of photographs of just six outfits which when the collections often featured forty or more, suddenly this became an impractical way of doing the company pictures. It was then that they decided to do the photography in-house.

So a year later and another hefty investment of £6,000 he had his first Hasselblad and began building a collection of professional studio equipment including various flash lights, reflectors and so on to develop the means to be independent from fancy PR companies who were too casual and extravagant with expense accounts and silly budgets.

So with his new camera the era began taking him on a journey of recording the developments of design within the business and capturing moments of natural phenomena that further inspired the creativity of design and craftsmanship of textiles. After over thirty years, the collection of pictures chronicling the history and inspirations of the textile business now numbers in the thousands. Over time, these will begin to again see the light of day and emerging to give them a new lease of life as colourful and evocative images ready to hang on the wall.